The global positioning system (GPS) is

The satellite-based Global Positioning System (GPS) is a U.S. Government-owned utility that provides users with positioning, navigation, and timing (PNT) services. The U.S. Air Force operates the space and control segments, consisting respectively of the GPS satellite constellation and the worldwide control stations that maintain the satellite orbits and adjust the satellite clocks. The U.S. government has invested more than $5 billion since 2009 in GPS and provides GPS service free of direct charge to users worldwide.

The GPS system consisting of space, ground control, and user equipment segments that support the broadcasts of military and civil GPS signals. Each of these signals includes positioning and timing information, which enables users with GPS receivers to determine their position, velocity, and time 24-hours a day, in all weather, worldwide. GPS equipment is used on aircraft, ships, and land-based vehicles, and mobile hand-held units provide individuals with these capabilities as well.

GPS produces latitude/longitude coordinates by relying on established trigonometric principles, timing, range measurements, and several statistical models. Analogous to traditional land surveying, GPS requires a minimum of four simultaneous satellite observations to precisely position a point on the earth. By recording signals from at least four of the satellites, a GPS receiver is able to determine the X, Y and Z coordinates of the receiver anywhere on the earth's surface or on an aircraft. Since 2000 almost any GPS receiver is able fix a location within a few meters of its actual location.[4]

Initiated as a test program by the Department of Defense in the early 1970s, the Global Positioning System has provided positioning, navigation, and timing (PNT) data for military and civilian applications since 1992.[5] The system uses 24 satellites that orbit the Earth at an altitude of 10,900 nautical miles, portable or vehicle-mounted GPS devices receive signals from the satellites and calculate the user's position. GPS operates 24 hours a day, can serve an unlimited number of users, and operates in all weather conditions. The United States provides GPS data free of charge.

GPS began operations with a full constellation of satellites in 1995. Over time, GPS has become vital to military operations[6] and a ubiquitous infrastructure underpinning major sections of the economy, including telecommunications, electrical power distribution, banking and finance, transportation, environmental and natural resources management, agriculture, and emergency services. GPS is used by all branches of the military to guide troop movements, integrate logistics support, enable components underlying battlespace situational awareness, and synchronize communications networks. In addition, U.S. and allied munitions are guided to their targets by GPS signals and GPS is used to locate military personnel in distress.

The aviation community worldwide uses GPS and GPS augmentations to increase the safety and efficiency of flight. GPS and GPS augmentations are also used by the agricultural community for precision farming, including farm planning, field mapping, soil sampling, tractor guidance, and crop scouting; the natural resources management community uses GPS for wildfire management and firefighting, pesticide and herbicide control, and watershed and other natural resources asset management. GPS is increasingly important to earth observation, which includes operational roles in weather prediction, the measurement of sea level change, monitoring of ocean circulation, and mitigation of hazards caused by earthquakes and volcanoes.

GPS is used by both carriers and non-carriers to determine a device's location. GPS technology is based upon satellite signals, which are picked up and interpreted by devices equipped with GPS receiver chips. The device then measures the time it takes for it to receive various satellite signals and triangulates its location. Triangulating GPS satellite signals can yield data accurate to within 10 meters.[11] "The receipt of four signals provides enough information to solve for the location of the receiver and the time offset of the local clock."[12]

"GPS is used by all branches of the military to guide troop movements, integrate logistics support, and synchronize communications networks. In addition, many U.S. and allied precision-guided munitions are directed to their targets by GPS signals."[13]

As shown in figure 1, GPS operations consist of three segments — the space segment, the ground control segment, and the user equipment segment. All segments are needed to take full advantage of GPS capabilities. 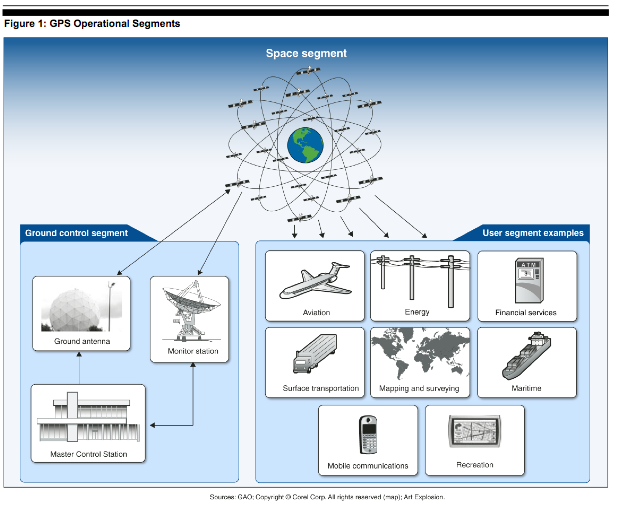 User equipment segment. The GPS user equipment segment includes military and commercial GPS receivers. A receiver determines a user's position by calculating the distance from four or more satellites using the navigation message on the satellites to triangulate its location. Military GPS receivers are designed to utilize the encrypted military GPS signals that are only available to authorized users, including military and allied forces and some authorized civil agencies. Commercial receivers use the civil GPS signal, which is publicly available worldwide.

Disruption of the GPS signal can come from a variety of sources, including radio emissions in nearby bands, jamming, spoofing, and naturally occurring space weather.[14]

The U.S. Air Force, which is responsible for GPS acquisition, is in the process of modernizing GPS. It is uncertain whether the Air Force will be able to acquire new satellites in time to maintain current GPS service without interruption. If not, some military operations and some civilian users could be adversely affected.

Retrieved from "https://itlaw.wikia.org/wiki/Global_positioning_system?oldid=210021"
Community content is available under CC-BY-SA unless otherwise noted.