Information operations (IO or Info-Ops) are

"Information Operations are an evolving construct with roots back to antiquity, thus it is both an old and a new concept. The late 1970's saw the emergence of Information Warfare (IW) and Command and Control Warfare (C2W) as war-fighting constructs integrating several diverse capabilities. These further evolved into Information Operations, recognizing the role of information as an element of power across the spectrum of peace, conflict, and war."[5]

"The most important concept to remember about IO is that it is not a weapon per se; it is a process. IO is a way of thinking about relationships. IO is an enabler, "source multiplier," a tool that increases one's ability to shape the operational environment. It is a planning methodology, which supports the strategic, operational and tactical use of traditional military forces. It is also a strategy, a campaign, and a process that is supported by traditional military forces. IO does this by using planning tools to synchronize, synergize, and deconflict activities as well as enabling the horizontal integration of these activities across the interagency spectrum."[6] 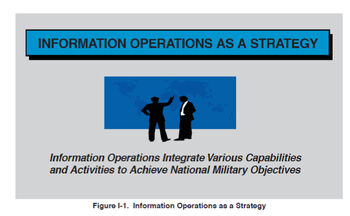 Information operations refers to the integrated employment of the core capabilities of electronic warfare, computer network operations, psychological operations, military deception, and operations security, in concert with specified supporting and related capabilities, to influence, disrupt, corrupt or usurp adversarial human and automated decision making while protecting our own.[7]

Capabilities supporting IO include information assurance (IA), physical security, physical attack, counterintelligence, and combat camera. These are either directly or indirectly involved in the information environment and contribute to effective IO.[9]

IO apply across all phases of an operation, the range of military operations, and at every level of war. They are a critical factor in the joint force commander’s (JFC) capability to achieve and sustain information superiority. Many different capabilities and activities must be integrated to achieve a coherent IO strategy. Intelligence and communications support are critical to conducting offensive and defensive IO. The thoughtful design and correct operation of information systems are fundamental to the overall conduct of IO. Additionally, to achieve success, IO must be integrated with other operations (air, land, sea, space, and special) and contribute to national and military objectives. 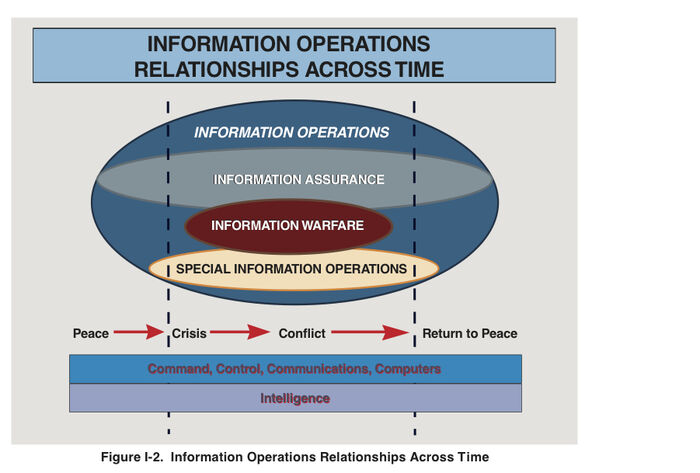 Offensive IO involve the integrated use of assigned and supporting capabilities and activities, mutually supported by intelligence, to affect adversary decision makers and achieve or promote specific objectives. These assigned and supporting capabilities and activities include, but are not limited to, operations security (OPSEC), military deception, psychological operations, electronic warfare (EW), physical attack/destruction, and special information operations (SIO), and may include a computer network attack.

Offensive IO applies perception management actions such as PSYOP, OPSEC, and military deception, and may apply attack options such as EW and physical attack/destruction to produce a synergistic effect against the elements of an adversary’s information systems. There are many capabilities and activities that require integration both defensively and offensively to conduct successful IO. Some of these capabilities or activities appear more offensive or defensive in nature, but it is their integration and potential synergy that ensures successful offensive and defensive IO.

The employment of Offensive IO to affect an adversary’s or potential adversary’s information or information systems can yield a tremendous advantage to U.S. military forces during times of crisis and conflict. As a result, combatant commanders must carefully consider the potential of IO to deter, forestall, or resolve back crises.

Offensive IO principles include the following: 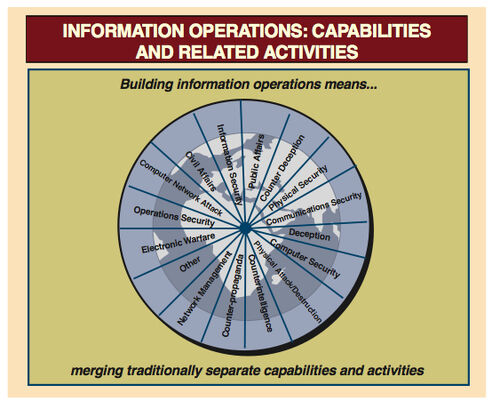 Defensive IO ensure the necessary protection and defense of information and information systems upon which joint forces depend to conduct operations and achieve objectives.

Four interrelated processes support defensive IO: information environment protection, attack detection, capability restoration, and attack response. Because they are so interrelated, full integration of the offensive and defensive components of IO is essential. JFCs and their subordinate commanders should plan, exercise, and employ available IO capabilities and activities to support integrated defensive IO.

Defensive IO training should consist of the integration of all available defensive capabilities, to include commercial and other DOD and non-DOD defensive IO capabilities, and encompassing both individual and organizational training. Defensive IO training should build upon the routine peacetime information and information systems protection and defense procedures used throughout the Department of Defense and other U.S. Government and commercial activities. 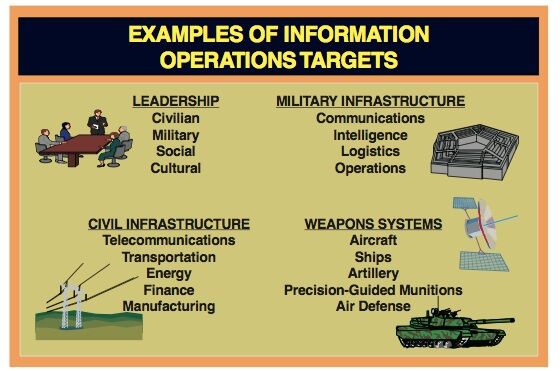 Retrieved from "https://itlaw.wikia.org/wiki/Information_operations?oldid=211973"
Community content is available under CC-BY-SA unless otherwise noted.