The Office of Management and Budget (OMB)[1] is a U.S. Executive Branch agency that assists the President in overseeing the preparation of the federal budget and supervises its administration in Executive Branch agencies. The OMB evaluates the effectiveness of agency programs, policies, and procedures, assesses competing funding demands among agencies, and sets funding priorities. OMB ensures that agency reports, rules, testimony, and proposed legislation are consistent with the President's Budget and with Administration policies.

In addition, OMB oversees and coordinates the Administration's procurement, financial management, information, and regulatory policies. In each of these areas, OMB's role is to help improve administrative management, to develop better performance measures and coordinating mechanisms, and to reduce any unnecessary burdens on the public.

The Federal Information Security Management Act of 2002 (FISMA) states that the Director of the OMB shall oversee agency information security policies and practices, including:

FISMA also requires OMB to report to Congress no later than March 1 of each year on agency compliance with the requirements of the Act.

A number of OMB memoranda have also addressed the roles and responsibilities of senior privacy officials.

Since its 1975 OMB Privacy Act Implementation, Guidelines and Responsibilities, OMB has periodically issued guidance related to privacy addressing specific issues as they have arisen.[5]

Beginning in 2005, OMB has also issued guidance significantly enhancing longstanding requirements for agencies to report on their compliance with privacy laws.[6] 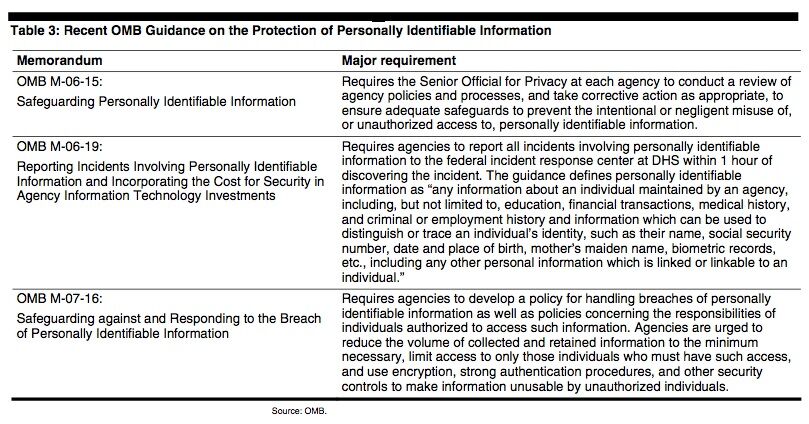 These laws and guidance set a variety of requirements for senior officials to carry out specific privacy responsibilities. These responsibilities can be grouped into the following six key functions:

In addition to performing key privacy functions, requirements in laws include responsibilities to ensure adequate security safeguards to protect against unauthorized access, use, disclosure, and destruction of sensitive personal information. Generally, this is provided through agency information security programs established under FISMA, and overseen by agency CIOs and chief information security officers (CISO). Moreover, OMB has issued guidance instructing agency heads to establish appropriate administrative, technical, and physical safeguards to ensure the security and confidentiality of records.

Retrieved from "https://itlaw.wikia.org/wiki/Office_of_Management_and_Budget?oldid=211686"
Community content is available under CC-BY-SA unless otherwise noted.