The IT Law Wiki
Register
Don't have an account?
Sign In
Advertisement
in: Copyright, Internet, Music,
and 3 more

Peer-to-peer (P2P) technology is a distributed computing software architecture that enables individual computers to connect to and communicate directly with other computers. Through this connection, computer users (known as "peers") can share communications, processing power, and data files. Sharing content files (file sharing) containing audio, video, data, software, text and photographs, or anything else in digital format is very common, and real time data, such as Voice over IP traffic, is also passed using P2P technology.

Peer-to-peer networks are mainly based on two possible architectures:

The structure of a P2P network changes as computers enter and leave the network, so a P2P network is in a constant state of change. 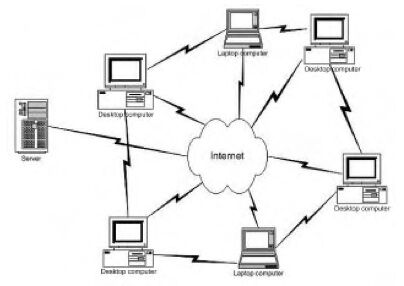 (1) a distributed software application running on users’ computers, which allows users to
(2) pool their files into a distributed pool (i.e., the files do not reside all in one location),
(3) search the pool files with keywords, and
(4) download the discovered files from peer to peer.

P2P file-sharing programs themselves do not perform the sharing or copying of files; rather, they employ a protocol that facilitates communication between the two peers who wish to share or copy a particular file.[3]

By eliminating the need for a central storage point for files, P2P file-sharing technology allows for faster file transfers and conservation of "bandwidth," i.e., the capacity to transmit information to and from a computer. In addition, because P2P technology decreases the need for businesses and consumers to store files on their hard drives, it can lower costs by conserving on storage requirements and saving on maintenance and energy costs related to data retrieval, sharing, and processing.

Some file-sharing applications provide anonymity by using redirectors and proxy servers and can disguise a user's location.

The earliest peer-to-peer network in widespread use was the Usenet news server system, in which peers communicated with one another to propagate Usenet news articles over the entire Usenet network. Particularly in the earlier days of Usenet, UUCP was used to extend even beyond the Internet. However, the news server system also acted in a client-server form when individual users accessed a local news server to read and post articles.

The growth of peer-to-peer services was facilitated by significant advances in network technology and better access to the Internet in the late 1990s. More users began using the Internet for email and access to information and content. Increased speeds and reduced costs for broadband access permitted the distribution of large media files by email or file-sharing networks. Services such as Napster, Kazaa, Grokster, and Gnutella allowed users to locate and distribute sound recordings and video materials — generally without permission of the copyright owners.

Current commercial uses of P2P technology include the licensed distribution of games, movies, music, and software. Major videogame publishers distribute their games through P2P and have achieved a total of more than 200 million downloads. In addition, some independent movie studios, music recording labels, and artists have licensed copyrighted material and promote and sell their products over P2P networks. As a result, P2P has become the largest distributor of authorized content on the Internet, with an average of more than 50 million transactions per month.

Other commercial applications include video streaming, video on demand, instant messaging ("IM"), and use of computers to provide telecommunications service through voice-over-Internet protocol ("VoIP"). Further, P2P technology is used to back up storage of documents and other digital content, and for intra-business collaborative project management. But by far the most common use of P2P technology — and the use generating the most attention — is consumers downloading P2P file-sharing software programs in order to access files stored on other consumers' computers, including music, movies, television programs, videogames, software, and pornography. Using these programs, consumers also can make their own personal files available for sharing with other users.

There are also academic and other non-commercial "collaborative" applications of P2P technology. The LionShare project at Pennsylvania State University, for example, is a closed P2P network designed to facilitate academic research. The network is secure, and all users must be authenticated and authorized in order to access it. LionShare merges secure and expanded electronic file-exchange capabilities with information gathering tools into a single, open-source application, enabling staff and students to search for information both within the network and among standard information repositories that exist outside the network. Faculty and students also can publish their work on the network.

P2P technology also is being used in certain data processing functions in the applied mathematics and medical research contexts. Other uses include the non-commercial distribution of software, writing, art, photography, or other data by publishers who do not wish to charge for the content — for example, the free distribution of electronic books to enhance literacy, and the dissemination of free academic curricula such as music lessons from a college of music.

Applications of P2P technology by government include NASA's use of BitTorrent as a download mechanism for its World Wind program, which allows users to access NASA satellite imagery to "virtually" visit any place in the world. NASA's Jet Propulsion Laboratory and the University of Maryland have also begun using P2P technology, and Boeing is using the technology in developing combat support software systems for the U.S. Army.

Participants stated that P2P file-sharing technology can substantially reduce costs and enhance efficiencies. In the business environment, for example, using P2P technology to eliminate the need to house data, such as accounting data and inventory data, in centralized servers can save on storage space and costs. Such use also can yield savings on maintenance and energy costs related to data retrieval, sharing, and processing. P2P also facilitates faster downloading and exchange of files, which benefits users.

These aspects of P2P technology hold promise for novel future applications. For example, P2P provides the potential to utilize the "untapped resources" of computers in people's homes and offices, including unused storage, central processing unit capacity, and bandwidth when the computers are not in use. Although participants generally stated that P2P technology will lead to novel applications, little information was provided describing what these applications are likely to be and what economic effects they are likely to have.

The benefits of P2P technology appear to increase as the number of users increases. Economists call such a phenomenon "network effects" — that is, certain products become more useful as more and more people use them. The viability of future applications likely will depend in part on how P2P technology's benefits balance out compared to its potentially significant side effects, such as copyright infringement and other risks, including viruses and spyware.

"Peer-to-peer networks partition and store data among interconnected servers and then encrypt that stored data so that no centralized server has access to identifying information."[5]

P2P file-sharing networks have valid uses, but they also enable users to easily search for, obtain, possess, and/or distribute a variety of illegal content. An individual who uses P2P may possess a combination of illegal material and illegally obtained data, such as —

P2P file-sharing programs allow computers to download files and make them available to other users on the network. P2P users can designate the disk drives and folders from which files can be shared. In turn, other users can download and view any files stored in these designated areas.

People who use P2P file-sharing software can inadvertently share files. They might accidentally choose to share drives or folders that contain sensitive information, or they could save a private file to a shared drive or folder by mistake, making that private file available to others. In addition, viruses and other malware can change the drives or folders designated for sharing, putting private files at risk. As a result, instead of just sharing music, a user's personal tax returns, private medical records or work documents could end up in general circulation on P2P networks. Once a user on a P2P network downloads someone else’s files, the files can’t be retrieved or deleted. What's more, files can be shared among computers long after they have been deleted from the original source computer. And if there are security flaws or vulnerabilities in the P2P file-sharing software or on an organization’s network, the P2P program could open the door to attacks on other computers on the network.