"Smartphones combine the telecommunications functions of a mobile phone with the processing power of a computer, creating an Internet-connected mobile device capable of running a variety of software apps for productivity or leisure."[5]

According to Pew Research, as of October 2015, 68% of U.S. adults own a smartphone, up from 35% in 2011 when Pew Research first began examining smartphone adoption.[8]

Vendors of smartphone products and services

Four types of companies are primarily responsible for smartphone products and services in the United States: 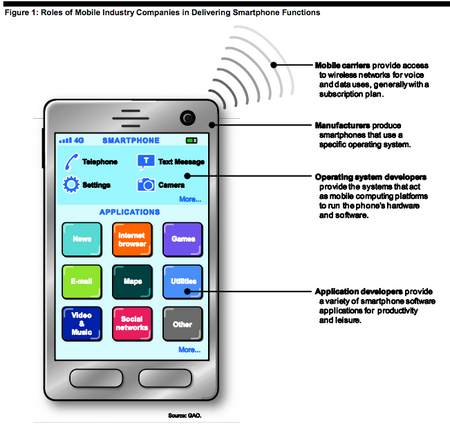 Together, the products and services developed by these various companies allow users to take advantage of the various functions smartphones provide.

The Communications Act of 1934, as amended, imposes a duty on mobile carriers to secure information and imposes particular requirements for protecting information identified as customer proprietary network information (CPNI), including the location of customers when they make calls. The Communications Act requires express authorization for access to or disclosure of call location information concerning the user of commercial mobile services, subject to certain exceptions.[10] Carriers must also comply with FCC rules implementing the E911 requirements of the Wireless Communications and Public Safety Act of 1999, including providing location information to emergency responders when mobile phone users dial 911.[11]

The Electronic Communications Privacy Act of 1986 sets out requirements under which the government can access information about a user's mobile phone and Internet communications. This includes legal procedures for obtaining court orders to acquire information relevant to a law enforcement inquiry.

Retrieved from "https://itlaw.wikia.org/wiki/Smartphone?oldid=213043"
Community content is available under CC-BY-SA unless otherwise noted.