Although radio frequency spectrum is abundant, usable spectrum is currently limited by the constraints of applied technology. Spectrum policy therefore requires making decisions about how radio frequencies will be allocated and who will have access to them.

The goals of spectrum management include: rationalize and optimize the use of the radio frequency spectrum; avoid and solve interference; design short and long range frequency allocations; advance the introduction of new wireless technologies; coordinate wireless communications with neighbors and other administrations. Radio spectrum items that need to be nationally regulated include: frequency allocation for various radio services, assignment of licenses and radio frequencies to transmitting stations, type approval of equipment, fee collection, notifying ITU for the Master International Frequency Register (MIFR), coordination with neighboring countries (as there are no borders to the radio waves, external relations toward regional commissions (such as CEPT in Europe, CITEL in America) and toward ITU.

The U.S. history of spectrum management is as old as the advent of radio communications. In 1906, the year when speech and music were first broadcast using radio, the first international radio conference was held. In the United States, widespread interference caused by unchecked transmission resulted in the Radio Act of 1912. The 1912 Act required the registration of transmitters with the Department of Commerce, but did not provide for the control of their frequencies, operating times, or station output powers. Thus, the 1912 Act was largely unsuccessful.

The Radio Act of 1927 established the Federal Radio Commission, which was shortly replaced by the Federal Communications Commission (FCC) under the Communications Act of 1934 (the "Act").[4] The FCC is authorized to develop classes of radio service, allocate frequency bands to the various services, and authorize frequency use to non-federal users.

In addition, Section 305 of the Act preserves for the President the authority to assign frequencies to all federal government-owned and operated radio stations,[5] as well as the authority to assign frequencies to foreign embassies in Washington, D.C., and to regulate the characteristics and permissible uses of the government's radio equipment.[6] The President has delegated these powers to the Assistant Secretary for Communications and Information who is also the Administrator of NTIA.[7]

As shown in Figure 5, the result of the Act is that spectrum management, in the United States is split between NTIA and the FCC, with inputs from other agencies in certain circumstances. NTIA manages the federal government's use of the spectrum while the FCC manages all other uses. However, the Act does not mandate specific allocations of bands for exclusive federal, non-federal, or shared use; all such allocations stem from agreements between NTIA and the FCC. 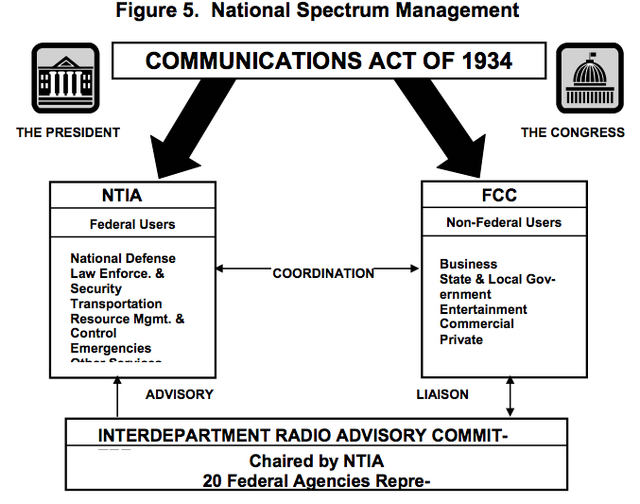 Radio frequency spectrum is managed by the Federal Communications Commission (FCC) for commercial and other non-federal uses and by the National Telecommunications and Information Administration (NTIA) for federal government use.

The demand for spectrum is intense and the FCC has responsibility for allocating spectrum among the various users. As wireless broadband networks continue to shift from traditional voice networks to those that incorporate a wide range of advanced broadband services, they will need more spectrum in wider contiguous bandwidths.

The FCC, over many years, has developed and refined a system of exclusive licenses for users of specific frequencies. Auctions are a market-driven solution to assigning licenses to use specific frequencies and are a recent innovation in spectrum management and policy. Previously, the FCC granted licenses using a process known as "comparative hearings" (also known as "beauty contests"), and has used lotteries to distribute spectrum licenses. 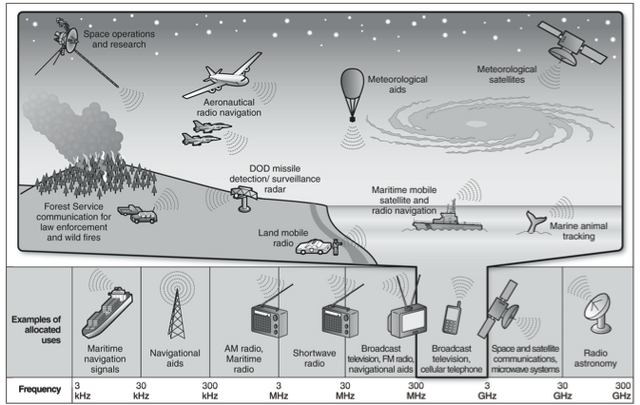 How this spectrum should be allocated among the myriad users, the size of the blocks allocated, and whether any special considerations should be given to specific entities (e.g., rural or small providers) that bid in spectrum auctions are among the issues confronting policymakers.

Retrieved from "https://itlaw.wikia.org/wiki/Spectrum_management?oldid=213808"
Community content is available under CC-BY-SA unless otherwise noted.