Time shifting is the recording of programming to a storage medium to be viewed or listened to at a time more convenient to the consumer. Typically, this refers to TV programming but can also refer to radio shows via podcasts and any other content made available at a specific time.

In recent years, the advent of the digital video recorders (DVR) has made time shifting easy, by using a electronic program guide and recording shows onto a hard disk. Some DVRs have other possible time shifting methods, such as being able to start watching the recorded show from the beginning even if the recording is not yet complete.

In the past, time shifting was done with a video cassette recorder (VCR) and its timer function, in which the VCR tunes into the appropriate station and records the show onto videotape.

Table 1 is a comparison of time-shifting technologies. 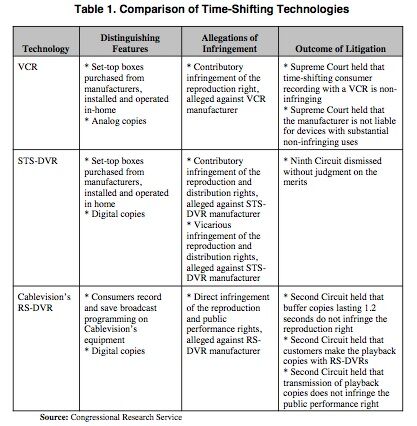 The legality of time shifting TV programming was estaablished in the landmark U.S. Supreme Court decision in Sony Corp. v. Universal City Studios, Inc., when Sony argued successfully that the use of its Betamax video recorder for time shifting of free, over-the-air programming was a fair use under U.S. copyright law.

Retrieved from "https://itlaw.wikia.org/wiki/Time_shifting?oldid=106188"
Community content is available under CC-BY-SA unless otherwise noted.